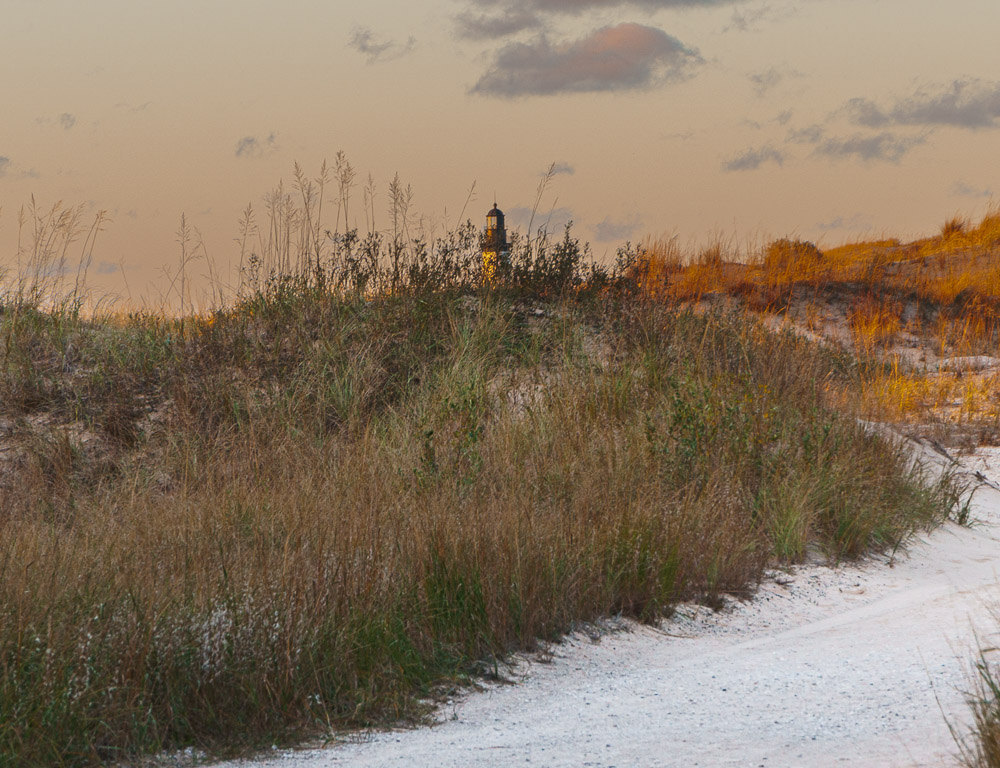 I was really looking forward to my visit to the Big Sable Lighthouse. I had heard so many great things about it, and I was excited to see it for myself. But I was about to learn a very important lesson in planning a photo location shoot.

A Day of Visiting Lighthouses

My plan for the day was to visit five of Lake Michigan’s iconic lighthouses in northwest lower Michigan – Point Betsie Lighthouse, Frankfort Light, Manistee Pierhead Light, Luddington Breakwater Light, and Big Sable Light. It was an aggressive schedule, and I wanted to time it so I could be at Big Sable at Sunset. My round trip from Ann Arbor was about 9 hours, so I knew it would be a very full day of driving and shooting.

The trip was all going to plan, and I got some very good images of the first four lighthouses with moody skies and waves. Going well, that is until I pulled into the Luddington State Park parking lot about 20 minutes before sunset. Most of the lighthouses are adjacent to their parking areas, for Big Sable, I had not planned for the two-mile walk! I thought I was going to miss the sunset!

Built in 1867, Big Sable is the fourth tallest lighthouse on Lake Michigan. With a 112-foot (34 m) tall, conical brick tower with an attached keeper’s quarters. The black and white striping really makes this lighthouse’s tower a striking sight along the lake.

Big Sable Lighthouse is one of five lighthouses in Michigan listed on the National Register of Historic Places. The light is currently operated by Sable Points Lighthouse Keepers Association. The SPLKA keeps the site in operation and provides for building maintenance. The building is open for tours daily 10 am-5 pm from the end of May to the end of October. You can climb to the top or visit the gift shop in the original Keeper’s Quarters.

Arriving at the Light

As I said, it was a long day of driving and visiting gorgeous lighthouses on the lake. Since most of the lighthouses are a short walk from the parking area, I planned to get to Big Sable about 30 minutes before sunset. But when I got to the parking lot at Luddington State Park, I could not see the lighthouse anywhere. Checking the park map was the first time I realized I was in for a hike.

So half an hour to sunset and golden hour light in full swing, I strapped on my camera bag and began a steady jog out to the lighthouse. I was so annoyed at myself for not planning this out. The dread of missing the sunset helped keep my pace up even as the sun started to touch the horizon out on the lake.

Even though I arrived at the lighthouse shaky and sweaty (I wasn’t in that good of shape then), I did make it in time to catch the glorious sunset light on the tower. One of the things that really was to my advantage was that even with the sun on the horizon, the light reflecting off of the lake extended the golden hour for at least 30 more minutes.

But this episode taught me an important lesson, you need to plan for photo locations. I’m really glad on this trip, I was alone and did not have to hustle other photographers down the trail.

Since this time I’ve learned to use a tool like PhotoPills or PlanIt. To use them not only to find where the sun, moon, or astronomical features are. But to see the location, plan the trip, and pre-visualize the shots I want.

All-in-all, even with my hurried state, I think my visit to Big Sable turned out OK. Once my panic had subsided, was able to get some really great images of the lighthouse and the surrounding site. I know that I will go back there again. Next time, with better planning, I’ll try for the Milky Way or some Auroras in the sky.

Hopefully, you’ve learned from my mistake (I know I have). So when you get the chance to visit Big Sable Lighthouse, if you take the time to do the planning, you will arrive in a calm state of mind that will allow you to truly enjoy this grand historical site.

Thanks for reading! If you have any questions, please leave a comment below. Also, if you want to see some of my other trips around the state, check out these posts on Pointe aux Barques Lighthouse and The High Rollways.

And as always, keep on clicking!

Where is Big Sable Lighthouse?

Big Sable Lighthouse is located in Luddington State Park on the shore of Lake Michigan.

Luddington State Park Trail Map – So you don’t get lost. Kara and I attended a local meetup/photowalk in Ann Arbor. It was fun to meet some other local photographers and discuss tips… Photographing rural landscapes offers a sense of peace and tranquility that can be difficult to find in urban areas. They allow us to reconnect with the past and cast an artful eye on nature. Mornings, on the way to work, sometimes I stop by the Huron River as it makes its way into Ann Arbor. This… Yellowstone National Park is one of the most popular parks in the United States, and for a good reason! There are many… Here on a frozen Argo Pond, whimsical Ann Arborites offer an alternative to summer water sports and nature walks. With some giant…