Considered Michigan’s answer to Arizona’s famous Horseshoe Bend, the High Rollways above the Manistee River in my opinion is one of Northern Michigan’s hidden treasures.

A Trip to the High Rollways

I live in southeast Michigan and face it, most of lower Michigan is flat. It’s not the billiard table flat of Kansas, there’s the occasional roll to the scene, but there are no mountains and gorgeous overlooks are few and far between. This is why we travel “Up North”.  The north is wilder, filled with high hills, dense forest, and rolling rivers.

I had seen photos of a horseshoe bend river vista in northern Michigan that seemed like a fantastic place to go and get some fall images.  To me, it captured the grandeur of the north.  A little research and I found it was called “The High Rollways Overlook” or the “Buckley High Roll-Away”, or “Highbanks Overlook” – lots of names for the same awesome spot.  In any case, I started up Google maps and made it ready to head out.

The Manistee River provides a great example of this rustic, northern Michigan terrain. The winding path of the river cuts through one of the richest timber areas in Michigan. Lumbermen saw the high slopes along the river as nearly perfect for launching the cut logs into the water for transport to the mills downstream.

In the heyday of the state’s lumber era, 1.2 billion board feet of timber was harvested and floated down the river. The logs were sawn into lumber and shipped across Lake Michigan to help build the growing city of Chicago.

But the logging days are part of history now and the forests have been regrown. The banks of the river are now enjoyed by the bikers, hikers, and travelers that flock here. And with the regrown hardwood forests, one of the best seasons to explore these lands is autumn, with bright orange and gold highlights, it’s truly magical.

The High Rollways Overlook is one of those “secret spots” that few have discovered. Tucked off of the main road and up a dirt lane, the overlook offers a gorgeous view of the river and valley.  I was hoping to be lucky enough to get there before the autumn colors had totally dissipated.

The High Rollways Overlook is one of those “secret spots” that few have discovered. Tucked off of the main road and up a dirt lane, the overlook offers a gorgeous view of the river and valley.  I was hoping to be lucky enough to get there before the autumn colors had totally dissipated.

One of the difficulties in visiting any autumnal vista is in the timing. With the vagary of nature’s swings in temperature and winds, and the work-a-day world to contend with, finding just the right day to make a photography run up north is tricky. But you watch the weather reports, and look at social media to monitor the conditions, and make your plans. Then you pull the trigger, but often you’ll end up getting there just one day too late.

This was my plan for this visit, but alas, a moderate storm had blown through the day before, knocking some of the best leaves off and leaving some of the branches bare. Still, I set out hoping for enough color to remain in the trees to capture some nice landscapes.

To get to the observation area of the overlook, there’s a short hike up a gravel path from the parking area leading to the neatly kept boardwalk that traverses the clifftop. It’s fairly accessible to most travelers, but wheelchairs may have a difficult time.

In my case, after a 3 1/2 hour drive, my arrival at the Rollways was a little confused, probably due to a lack of coffee. In fact, I missed the final turn to the parking lot and in the end, I parked in a work crew’s lot.  I got out my camera gear and looked for the trail to the overlook. After heading off down the obvious trail and finding a logging operation, I doubled back to find the real trailhead. With a short, pleasant walk through the woods, I finally arrived at the overlook.

The view from the overlook was simply amazing. In front of me was a steep sandy bank down to the sparkling river below. Rich hues of green, gold, and rust filled the valley below and spread into the distance. The river itself curved in and looped through the area below the cliff, making the classic horseshoe shape.

So far, the sun had not been kind. It was playing a little game of “hide and seek”, where it was mostly hiding. And sure enough, when I arrived at the overlook, the sun was behind a bank of dense clouds. This left the scene in front of me pretty flat. The color was good, but no highlights or shadows. I was a little disappointed by that, but at least it wasn’t raining. As I was standing on the observation deck and got out my camera, I could hear a gust of wind coming up through the trees behind me that was sure to be followed by rain.

As the gust blew by, it brought a flurry of leaves over my head and the sun chose just that moment to come out from behind the clouds, beautifully lighting the valley below. Fortunately, my camera was out and ready to go. I was able to capture the fantastic scenery as the leaves blew over my head and down into the valley.

I took a few more shots from the observation deck and then moved on along the cliff top to see what other views the High Rollways offered. The path followed the cliff edge with a fence to show where you should not go – and I almost always stayed behind the fence. There was one place where the fence took a zig and, unknowingly, I took a zag and ended out beyond the safe zone. On a sandy ledge, 100+ feet above the river was not the best place to be, so I moved back over the fence to safety.

The scene captured, and with more clouds moving in, I decided to wrap up my stop at the High Rollways and move on. After all, there’s a whole coastline of lighthouses nearby and the possibility of a storm moving in. With a few hours until sunset, it was time to head out.

On the way out I stopped at a few more locations that highlight the area. The Manistee River valley is home to many beautiful rural vistas and is well worth the visit.  So I leave you with these images showing you that, while you come for the trees, you should also stop and look at the pandas.

The High Rollways is located south of Traverse City, MI near the town of Buckley.  To get to the observation deck, head east from town for about 5 miles on W 4th Rd.  There is a sign to a well-worn dirt road that leads about 2 miles out to the parking area. At the final fork, turn right instead of left to get to the parking lot (unless you want to meet some nice loggers). 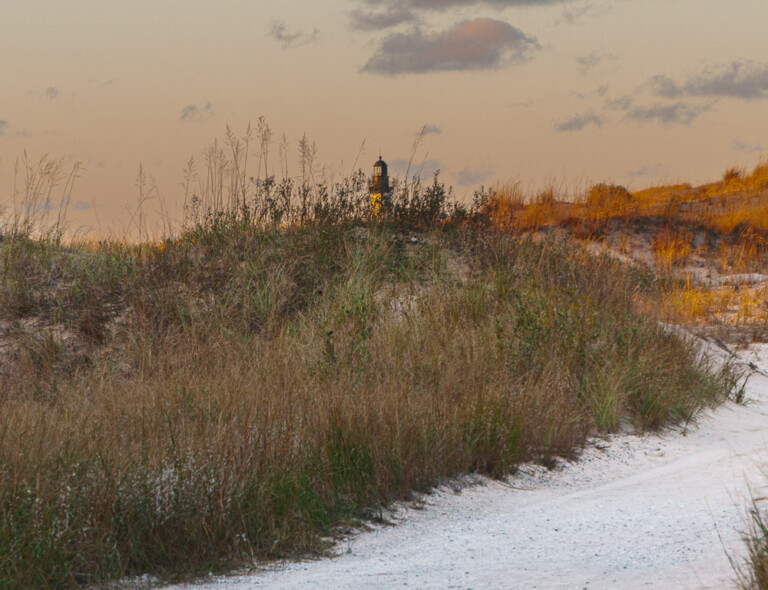 I was really looking forward to my visit to the Big Sable Lighthouse. I had heard so many great things about it,…

Photographing rural landscapes offers a sense of peace and tranquility that can be difficult to find in urban areas. They allow us to reconnect with the past and cast an artful eye on nature.

Good landscape photographers know that the key to taking great photos is to find the right composition, light, and weather. This means…

You’ve finally arrived at a wonderful outdoor setting, but the weather isn’t cooperating. The sky is a dull grey with only a…

Mornings, on the way to work, sometimes I stop by the Huron River as it makes its way into Ann Arbor. This…

Crosswinds Marsh is a beautiful nature preserve spanning over 1000 acres of woodland, ponds and wetlands. There’s no way to guess that it used to be farmland.